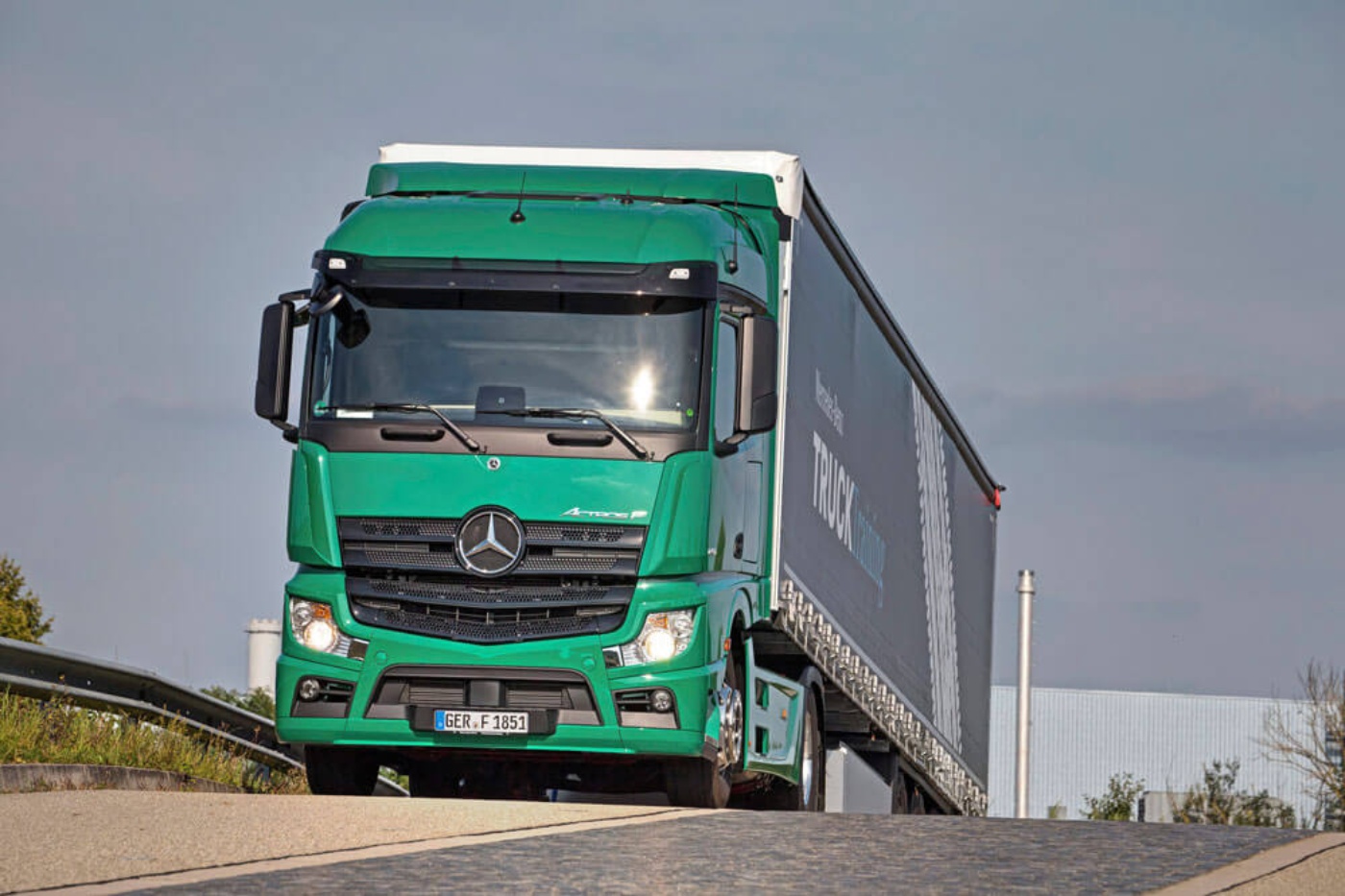 There are cab variants aplenty with the Actros. Now two more have been added: 19 variants instead of 17. This is due to the new Actros F, which combines a 2.50-meter width with a small engine tunnel.

There are cab variants aplenty with the Actros. Now two more have been added: 19 variants instead of 17. This is due to the new Actros F, which combines a 2.50-meter width with a small engine tunnel.

As if the world of Actros cabs was not complicated enough already – until recently there were no fewer than five roof shapes, two widths and three different attachment heights. The arithmetic is not the simplest, especially when it comes to the attachment height. Daimler uses this term to designate the distance between the bottom edge of the floor panel and the top edge of the frame.

And for the sake of completeness, let’s also touch on an attachment height of 425 millimeters: the engine tunnel then gains height and this ultra-low figure results in a 320-millimeter-high stool in the middle of the cab. As a result, the respective variants have only a very low entry height, but this comes at the expense of the interior volume of the cab.

To prevent the number of cab variants becoming unmanageable, Daimler has so far always restricted 2.50-meter-wide cabs to have a level floor.

Now, of course, it might be regarded as a fine thing to have an Actros with a level floor. But less attractive is the fact that this requires a relatively high cab floor, and a fair degree of climbing to enter and exit the cab.

The Actros F is now the model that combines a 2.50-meter width with a moderate engine tunnel height of only 120 millimeters – at the same time as reducing the number of steps to just three, and lowering the entry height to just 1,460 millimeters. Drivers can opt for either a StreamSpace or BigSpace cab at this height. Attachment height: both 600 millimeters. This makes the cab arithmetic with the Actros a little more complicated, but in many ways life is easier.

The Actros F, shown here with 510 hp, and featuring a green painted cab and a red frame, also reveals that entry height reduction was not the only objective in the design of the Actros F.

The Actros F is only available with conventional exterior mirrors instead of with the digital MirrorCam. Photo: Michael Kern

A core feature of the Actros F is that it does not use the MirrorCam mirror replacement system. In short: the Actros F targets customers who are possibly a little less open to new, and specifically digital, features. What is more, the Actros is also kind to your wallet, as it is an impressive eight percent cheaper than the normal full-trim Actros.

But the Actros F is anything but a poor relative. Its design has been totally reworked, and is not just based on the 2.30-meter variants. This is revealed by the metal-coated steps of the Actros F.

Inside the cab, the Actros F, which Daimler is interestingly only selling as a left-hand drive model, welcomes its driver and passenger with what it calls the Classic Cockpit as standard. This means the good old tubes that are recessed so wonderfully deep into the walls of the instruments that the driver could even read them in the blazing sun. On the right is then either the traditional radio or – as a nod to the modern age – a multimedia touchscreen display.

However, because of its special steering column, the Actros has to forgo Active Drive Assist (ADA), which makes semi-autonomous driving possible – especially on major highways. Neither is the Actros F available with the 16-liter big block engine: in terms of power, the limit is 13 liters.