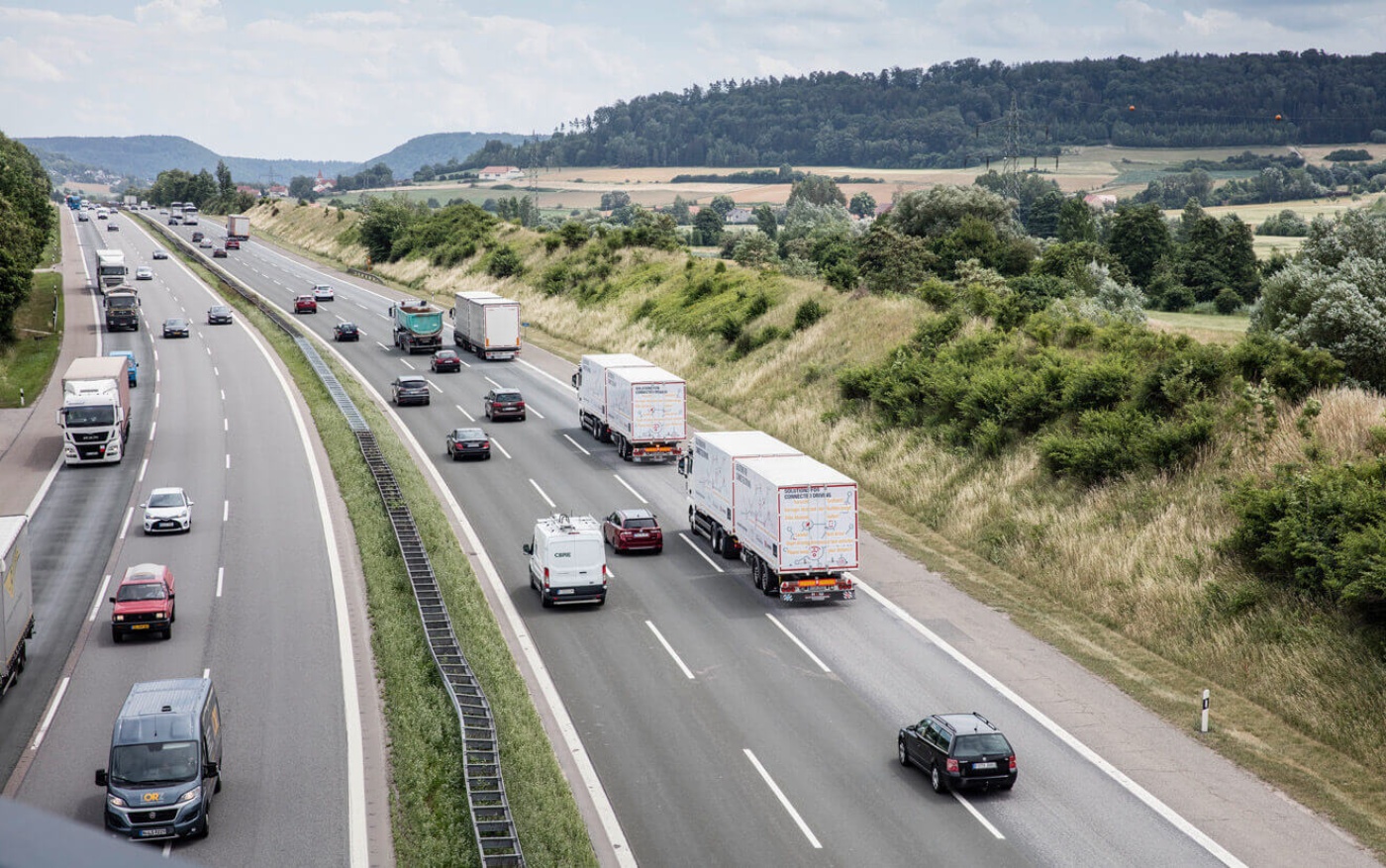 Every spring and fall, a look at the sky tells us that nature has developed effective solutions that can be used to minimize the braking effect of airflows. At these times migratory birds fly the long distances to their breeding grounds or their winter quarters. However, when geese and herons take up their striking formations they do not fly directly one behind the other. They prefer a V-shape because the vortices from the edges of one bird’s wings provide lift for the one behind – this beneficial effect is similar to the slipstreaming effect exploited by cyclists. Several years ago the slipstreaming principle began to be applied in truck-driving – in platooning, in which several partially autonomous trucks link up to form a convoy.

As soon as the trucks are connected via an “electronic drawbar” (a special wireless data link developed for vehicle-to-vehicle communication), the technology takes over the driving function for the following vehicles. Once the rear trucks have joined a platoon, they stay in lane, measure the distances between the vehicles, and automatically brake within fractions of a second if the vehicle in front reduces its speed. Every vehicle except the lead truck drives in the slipstream of the one in front. This should bring down fuel consumption and CO2 emissions. The drivers still occupy their cabs and either monitor what is happening or turn their attention to other tasks. If a vehicle leaves the convoy, its driver resumes control and assumes responsibility for his truck once again.

During recent years, there has been a real hype among the commercial vehicle manufacturers surrounding the topic of platooning – which is regarded as the next step on the path to completely autonomous trucks. But does platooning live up to that in practice? DB Schenker, MAN and the Fresenius University of Applied Sciences have tested the automated convoys under real-world conditions on Germany’s A9 freeway. In the research project EDDI (“Electronic Drawbar – Digital Innovation”), which received funding from the Federal Ministry of Transport and Digital Infrastructure (BMVI), professional truck drivers took to the roads for seven months in two electronically linked MAN trucks at a distance of only 15 to 21 meters, plying a route between DB Schenker’s branch premises in Nuremburg and Munich. After covering around 35,000 test kilometers, the truckers praised the comfort and the general sense of safety.

During the test, the Fresenius University of Applied Sciences investigated the psychological and neurophysiological effects on the drivers. “A general sense of safety and confidence in the technology are reflected in the drivers’ assessments of specific driving situations,” explains Prof. Sabine Hammer from the Institute for Complex System Research. The only “negative” aspect was other motorists who cut in. The truck drivers would therefore prefer to have the trucks closer together, only 10 to 15 meters apart, to prevent cars from moving into the gap between them. EEG measurements also showed no differences between platoon runs and normal runs regarding the drivers’ ability to concentrate or their fatigue. Interventions were necessary only once every 2,000 kilometers driven – which was much less often than expected. Furthermore, the study demonstrated savings of three to four percent in fuel consumption. The hoped-for saving of up to eight percent, however, did not materialize.

Semi-autonomous truck platooning — how does it work?