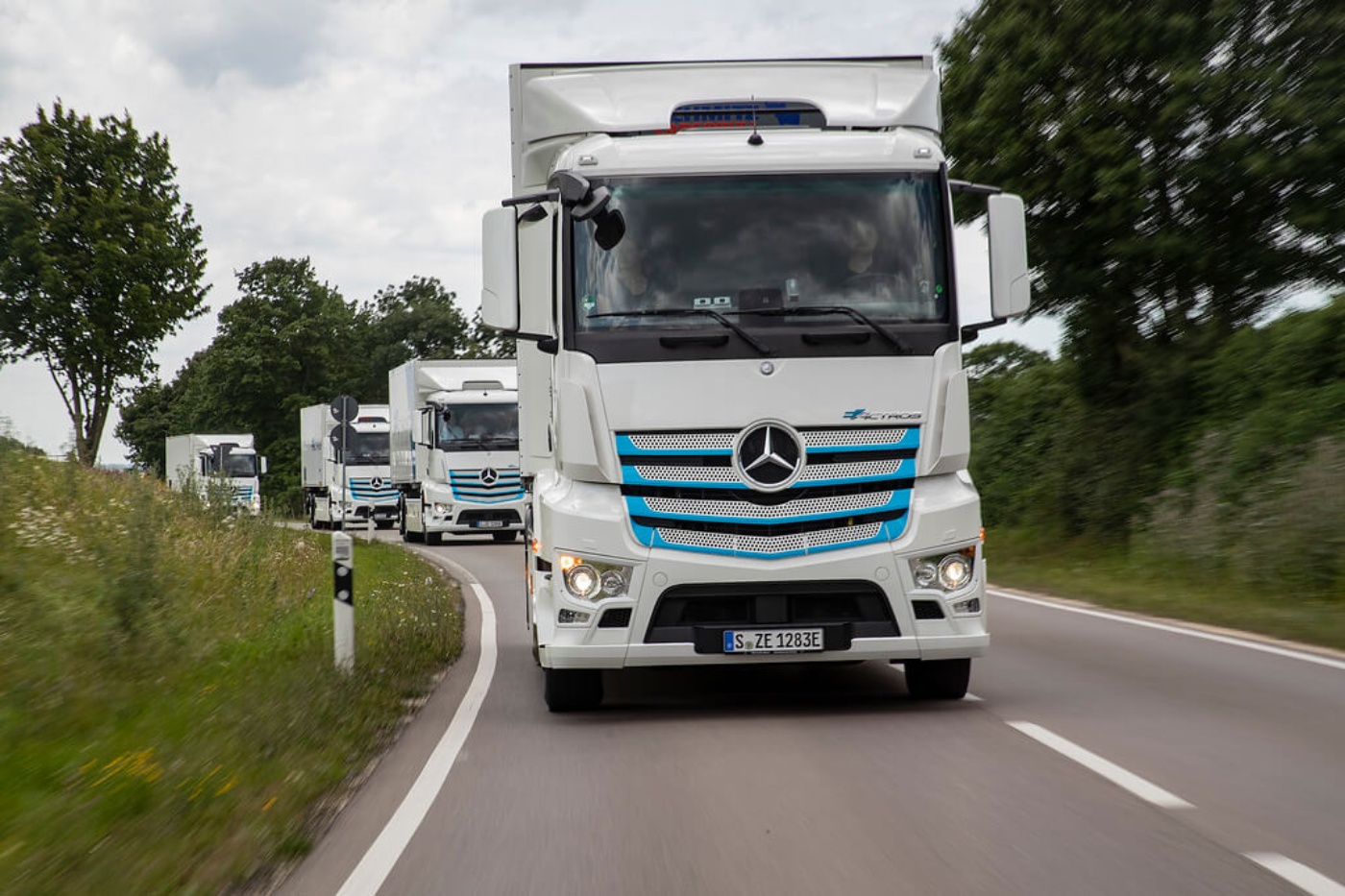 Logistik Schmitt: eActros in use

Logistik Schmitt is embarking on a new era of mobility with the eActros, the first close-to-production electric distribution vehicle from Daimler Truck. How does the eActros perform in operational use?

Logistik Schmitt is embarking on a new era of mobility with the eActros, the first close-to-production electric distribution vehicle from Daimler Truck. How does the eActros perform in operational use?

Back in February 2019, Logistik Schmitt was one of the first companies to test an eActros from Daimler Truck’s innovation fleet in practice. Now the mid-size third-generation family-owned business, which is run by Rainer Schmitt and Volker Klemm, has the chance to integrate the first close-to-production eActros into its fleet of 80 trucks. “This is a special honor for us,” announces CEO Rainer Schmitt.

Since then, CEO Schmitt has also completed one or two tours in the new eActros. What particularly impresses the 45-year-old about the new eActros is the safety and technology package inherited by the alternatively powered Daimler truck from its diesel siblings: Unlike the vehicles in the innovation fleet, the series-production trucks are equipped with mirror-cams, and Schmitt – when he test drives them himself – can use a modern multimedia cockpit and place his smartphone on a wireless station for inductive charging. He is also impressed with the regenerative braking system. In the close-to-production eActros, five levels are available for this on a switch to the right of the steering wheel.

According to Daimler, the new eActros can travel up to 400 kilometers on one battery charge. The prerequisite is that it is equipped with four battery packs weighing around 105 kWh each. In the case of Logistik Schmitt, there are three such battery packs – which means less battery weight, and thus more payload. The close-to-production eActros has a total weight of 27 tons, 17 of which are reserved for the load. The predecessor truck had a maximum permissible weight of 25 tons and a payload of about 14 tons. The transition from the old to the new eActros therefore gives Logistik Schmitt a payload advantage of several tons. It also means that the range is reduced to around 300 kilometers, which, however, awakens the ambition of the truck’s owners: “We want to beat the 300 kilometers, of course,” reports Schmitt. Due to the ideal operating profile – hardly any gain or loss of altitude and the main part of the route formed by the four-lane B462 federal highway – he enjoys ideal conditions for achieving more kilometers than promised by the manufacturer. However, this is something that needs to be tested first. With the eActros prototype, it was possible to achieve distances of around 200 kilometers on one battery charge.

In practice, however, the limited range did not cause any problems at Logistik Schmitt. The zero-emission vehicle never had to cover more than 150 to 170 kilometers a day for the logistics service provider in North Baden. The scheduling department assigned it high-frequency shuttle transports to the Daimler plants in Gaggenau and Rastatt. The electric truck transported axle components to Gaggenau and transmission components to Rastatt. On its return it was loaded with empties – be it Euro containers, wire mesh boxes or pallets.

Rainer Schmitt is now expecting something more from its successor. “We are looking forward to running the eActros permanently from Sunday evening to Saturday midday in three shifts when the plants are operating at full capacity again,” he announces. In this case, full use will likely be made of the 300-kilometer range.

With the new vehicle, Logistik Schmitt is changing its charging concept. The logistics service provider has now put a permanently installed high-performance charging station from Siemens into service in one of its two charging areas in Ötigheim. This delivers 160 kW of power, and makes the leap from 20 to 80 percent of a full charge in just one hour. Rainer Schmitt is also content to leave the charging level at 80 percent of a full charge, since a small buffer should be consciously preserved in order to use the potentials of recuperation during the journey.

Entrepreneur Schmitt is not afraid that his lights will go out if one day two trucks use the charging station for an extended period of time. “We moved into our plant in Ötigheim just four years ago, and we can get enough electricity there thanks to our own transformer station,” he explains. Only if the electric fleet grows exponentially will a clever charging management concept be necessary, adds the graduate business economist.

The entrepreneur thinks it is very likely that the electric fleet will become larger in the next few years. Most of their vehicles operate in the region, often only traveling distances of between 30 and 80 kilometers. The range and charging are therefore not a problem. Rainer Schmitt is convinced of the potential of electric mobility.