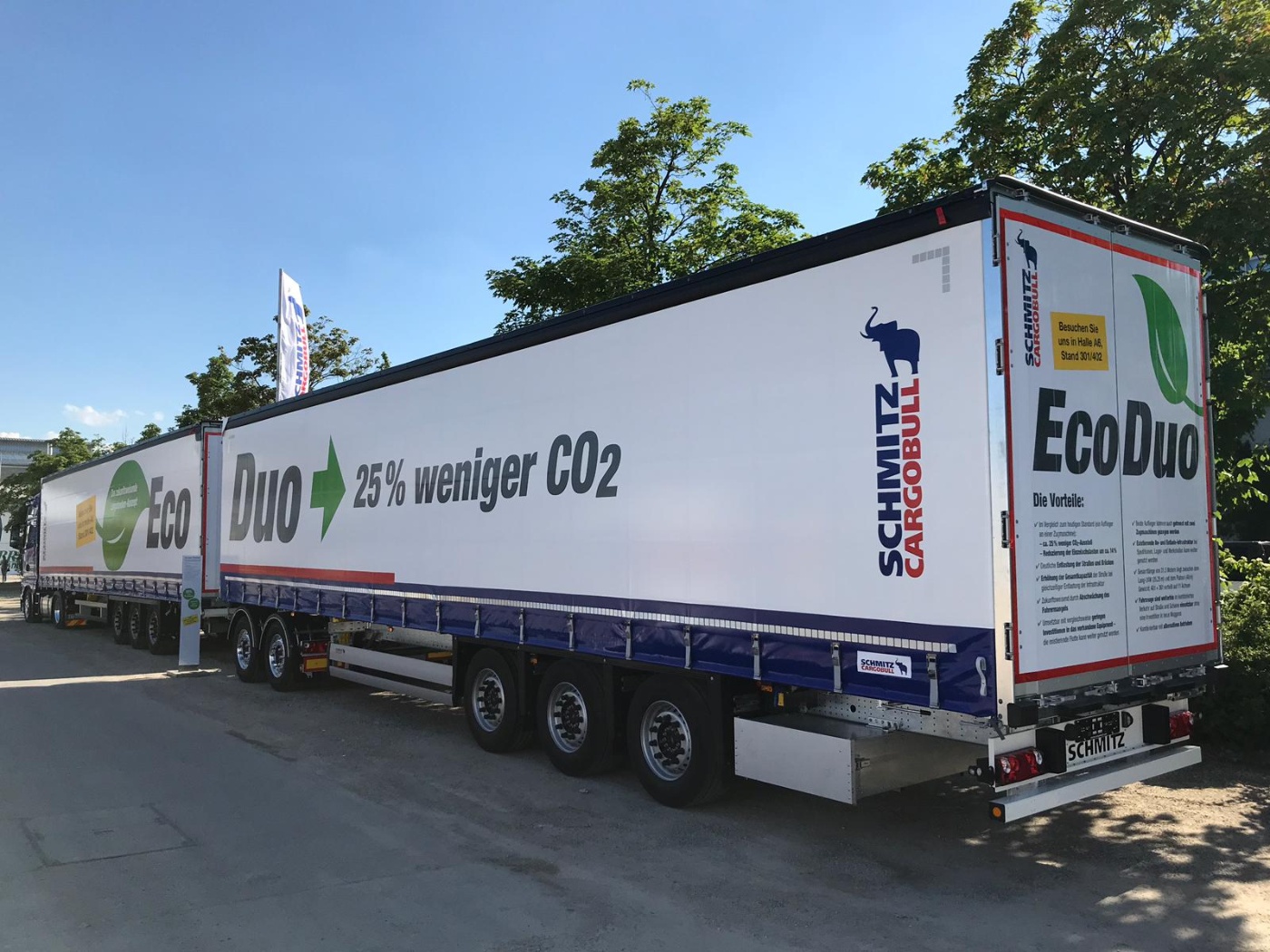 The trailer helps to save CO2

The classic trailer has played a passive role in the road train system up to now. But in future the towed units will be able to do much more than just serve as a loading space. The DVZ has asked around among the manufacturers.

The classic trailer has played a passive role in the road train system up to now. But in future the towed units will be able to do much more than just serve as a loading space. The DVZ has asked around among the manufacturers.

An autonomously operating trailer with its own drive and photovoltaics on the roof? When the marketing department of a trailer manufacturer published a photo of this "innovation" a few years ago on April the first, it elicited a broad grin from many a transport professional: the idea was simply too curious. Today, however, the grin would be far less broad: In the meantime, towed units also have an important role to play when it comes to putting the transport industry on track to achieve the ambitious CO2 reduction targets. The fundamental question is: Which measures will achieve which effects?

Alfons Veer, Chief Technical Officer at Fahrzeugwerk Bernard Krone, sees various possibilities here. One would be to harvest the low-hanging fruit by approving the Eurocombi across the board, another is aerodynamic optimisation. He has a differentiated opinion on this: "With the help of aerodynamics, the CO2 emissions of a road train can be reduced by more than 10 percent. But how do the systems prove themselves in the hard daily haulage work? The parts are located in the areas of the trailer where everyday life hits with damage." In addition, the fuel-saving effect of the add-on parts depends on the routes and distances over which the vehicles are used. "Aerodynamic fairings develop their effect best on the long haul," Veer summarises a rule of thumb.

Finally, it is also a question of ensuring that aerodynamically clad semi-trailers and articulated lorries continue to comply with the regulations of EU Directive 96/53/EC. But since there are no practicable solutions within the standard dimensions, Veer suggests another way: "When it comes to aerodynamics, the legislator has to play along: It's a matter of modifying the height and width specifications so that side fairings or rear diffusers can be used on the roof." At least something has already been done with regard to equipping trailers with rear wings. Solutions such as the automatic system from the Aachen-based think tank Betterflow can now be installed and used without any problems.

Drive for the towed unit

But the topic of aerodynamics is by no means the end of the considerations for reducing CO2 emissions at Krone. The clever minds of the trailer manufacturer are working on an exciting new concept together with the Aachen-based start-up Trailer Dynamics. In the future, the axle units of the trailers could be equipped with an active electric axle that supports and relieves the tractor when needed.

The Krone developers want to solve the problem of the axle not being allowed to push when the tractor unit is braking with a smart kingpin. This detects whether the trailer is being pulled or pushed and regulates the use of the electric axle. The potential for CO2 reduction is great: "With an electric drive axle in the trailer, CO2 savings of around 20 percent would be possible compared to a conventional road train," says Veer.

Krone, by the way, is not alone in tackling the issue: the supplier Wabco is also developing a similar system. Incidentally, both manufacturers are making a bet on the future, because the installation of such drive axles is not yet permitted. Only a so-called generator axle, which captures braking energy and feeds it into a battery, may be installed at present.

Veer's counterpart at Schmitz Cargobull, Chief Technology Officer Roland Klement, is a friend of more powerful transport units with larger load volumes. If the payload of a road train plays a rather subordinate role, then he sees an extra-long combination of tractor unit and two standard trailers coupled one behind the other as a real CO2 killer. "The Eco-Duo is a truck tractor with two 13.60 m long standard trailers and can reduce CO2 emissions by 25 per cent," he calculates, and he does not see handling as critical in hub-to-hub traffic. "Many logistics centres are very close to the motorway. The effort for the last mile after decoupling the Eco-Duo would be manageable."

The mode of transport counts

But since the Eco-Duo is currently only allowed to drive with a total weight of 40 tonnes in Germany, the combination would only be a solution for transporting light and voluminous goods. Therefore, according to Klement, it cannot replace the universal vehicle. But in other regions and countries such as Scandinavia or Spain, the combination is already being tested or even used with significantly higher road train weights.

However, the extra-long road train with two trailers is a niche product and still some time away from possible approval on German roads. For this reason, the developers at Schmitz Cargobull are working in parallel on another efficiency project, the CO2 trailer. The vehicles of the Eco-Generation came onto the market at the beginning of last year. The basis of the solution, which is offered in the Eco Fix, Eco Flex and Eco Varios versions, is an aerodynamically optimised, height-flexible body for the S.CS curtainsider semi-trailer, which is said to bring fuel savings of up to 5 percent. The idea behind it is simple: the liftable rear end gives the Eco-Trailer an aerodynamic shape and thus reduces air resistance. On the other hand, when needed – i.e. when the volume of the body needs to be fully utilised – the roof can simply be raised to normal height. And Klement is certain: "50 to 60 per cent of transports are suitable for the use of variable-height trailers."

That still leaves the option of equipping the towed units with electric axles. Here Klement takes a rather critical view of a possible version with active drive: "If a trailer is equipped with a driven axle, then the train stability must be guaranteed under all circumstances. That is technically complex." In addition, this would bring another disadvantage: in order to be able to really relieve the tractor unit, ample energy would have to be available for the e-axle. The batteries needed for this would weigh between 300 and 350 kilograms and therefore limit the payload unduly.

What Klement can well imagine, on the other hand, is an electric axle that exclusively generates electricity via generator and recuperation. The energy generated in this way can be used, for example, to operate a refrigerating machine. This also relieves the tractor and reduces CO2 emissions.

Conventions and a spirit of research

Kögel managing director Thomas Eschey, who is responsible for technology at the Burtenbach-based manufacturer, among other things, relies on conventional technology such as lightweight construction and optimisation of the load volume. "Our concern is to ensure that customers' requirements for significantly more payload and at the same time high durability even under heavy use are met," he says. In addition, the manager points out that his company has already been committed to the trailer extended to 15 metres, which offers four more pallet spaces than a conventional trailer, for 15 years.

However, Kögel is not closed to new approaches either. Together with the Technical University of Munich, the manufacturer's engineers have been thinking about what the Euro-trailer of the year 2030 might look like. Here, too, lightweight construction comes into play, but in addition, a full fairing is to minimise the air resistance of the load train. In addition, the vehicle – analogous to the ideas of Krone and Schmitz Cargobull – is to recover braking energy via a generator axle, which is buffered in a battery and made available to the truck drive or consumers such as a refrigeration machine when needed. "We have built such a prototype based on the Kögel Cool PurFerro quality together with SAF-Holland. The vehicle is now being tested in practice," explains Eschey. So the future is already rolling in today.