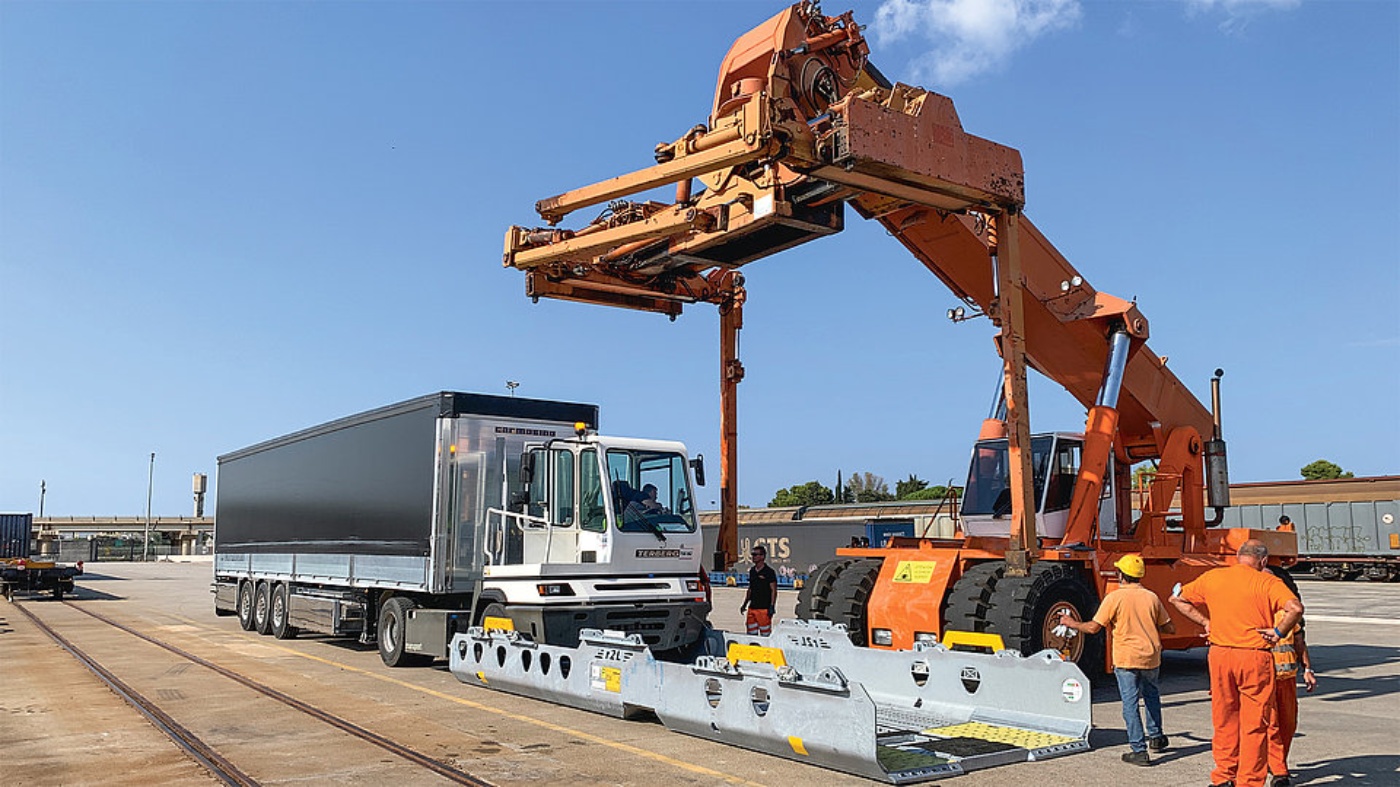 The market seems ripe for the basket

VTG and Vega want to bring non-craneable trailers onto the rails with R2L technology. The offer is obviously hitting a nerve. Demand is extremely high.

VTG and Vega want to bring non-craneable trailers onto the rails with R2L technology. The offer is obviously hitting a nerve. Demand is extremely high.

What is the best way to integrate non-craneable trailers into combined transport? More and more customers in Europe are apparently answering this question with "R2L": the technical solution, only launched on the market in early summer in a cooperation between the rail logistics company VTG and the Austrian vehicle logistics company Vega, is meeting with approval: "We are generating a pleasing turnover," says Marc Hunziker, who manages marketing at VTG. And that seems to be an understatement.

If a non-craneable trailer is to be loaded in a conventional transhipment terminal, it is pulled into a transhipment aid, the R2L basket. In the process, the wheels are automatically centred. To ensure that the kingpin is correctly positioned for pick-up in the corresponding plate, the terminal tractors have laser-based measuring technology installed that shows the driver exactly where to stop. The crane can then move the basket together with the trailer onto the wagon.

Those who want to use the baskets usually have to sign a contract for at least one year. Hunziker: "We don't usually push for longer commitment periods, but trust that the positive experience with the system will ensure that the cooperation is extended."

VTG offers different models for marketing. A more complex one: the customer hires pocket wagons and baskets as required and then assigns the traction straight away to the VTG subsidiary Retrack. This is the model chosen by the Dutch logistics company GVT for its connection between Tilburg and Szczecin. Hunziker: "We have just delivered another four baskets to GVT."

The Lithuanian freight railway LTG Cargo also uses this form of service. Since the first of August Retrack has been hauling three weekly round trips between Tilburg and Kaunas in Lithuania – a distance of around 1,600 kilometres. Two sets of VTG wagons and 44 R2L wagons are on the road, and VTG also provides service support for the leased equipment. Next year, a third wagon set with 36 baskets is to be added, says Hunziker – "as a basis for a fourth and fifth round trip".

Hunziker was particularly pleased about a large order from Italy. There VTG is leasing wagons to the intermodal logistics company Lotras, which is starting a connection between the Forlimpopoli area north of San Marino and the Bari region. Three T3000 wagon sets with 80 baskets are in use – "more have been announced for 2022". For the Italian market, Hunziker expects a demand of 600 to 700 additional wagons and about 1,000 baskets in the next three years.

VTG currently has 175 baskets in use, 150 are to be added by the end of February, 130 of which are already firmly planned. We are currently discussing a further procurement programme," says Hunziker, "involving a volume of up to 300 additional R2L baskets. A number of these are also to be designed for TWIN trolleys – so far only baskets for the common T3000 trolleys are in use. The TWIN version is currently being tested at Green Cargo in Sweden with two prototypes. And: VTG will hire 200 more T3000 wagons from February next year – almost all of them have already been hired out.

In practice, the R2L technology has so far proved its worth. "We haven't received a single report of damage yet," Hunziker is pleased to say. However, VTG and Vega always take a lot of time to train the staff and get them used to the new technology before using them in new terminals.

Hunziker expects particularly strong demand from Spain. There are hardly any intermodal offers for non-craneable equipment there. He therefore expects a demand of around 1,000 wagons and about 3,000 baskets for the next three years and wants to become active in this market in 2022 with Retrack also as a railway company. "These are huge figures," Hunziker himself has a little respect. But: VTG has the necessary background "to be able to set this up in line with demand and the market".

No operator business yet

Of all the plans that VTG and Vega announced in early summer, only one is still on "hold": to become an operator in the marketing of trains with R2L technology. Hunziker, however, had already restricted himself to only entering this business if sales of the new technology were not satisfactory. At the moment, however, that does not seem to be the case.

Cooperation with the big operators in continental combined transport, who have geared their business to craneable equipment, is still conceivable. But even if not: "That would give us a right to exist as perhaps also an active operator with our solution. Both technologies complement each other under the declared premise of wanting to shift traffic from road to rail."