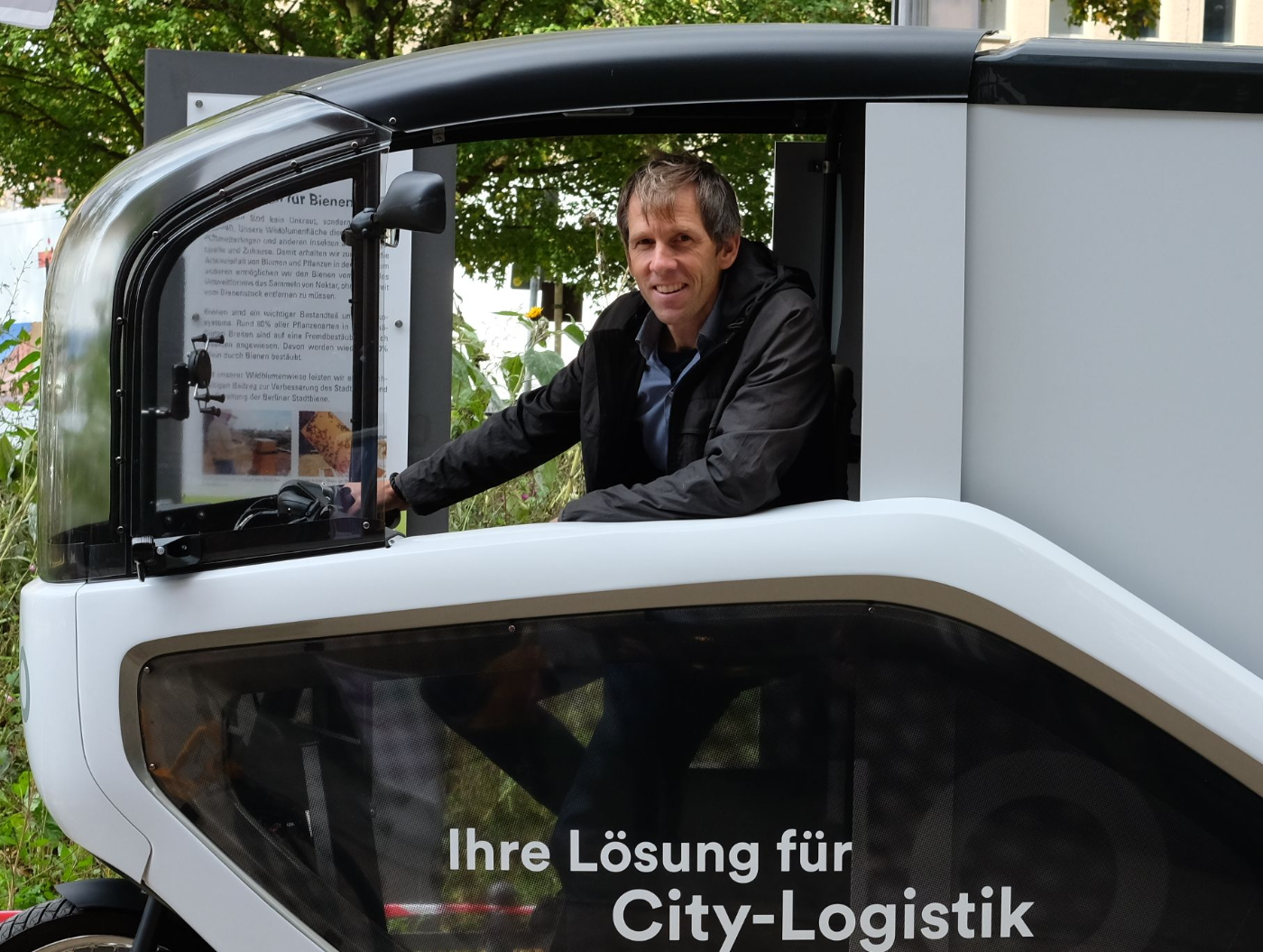 "There is money to be made with cargo bikes"

In an interview, the initiator of the "Cargobike of the Year" (CABOTY) award explains why cargo bikes are on the verge of a final breakthrough in logistics, what role electrification plays in this and what is still needed to continue the success story of the rediscovered means of transport.

Mr. Reichel, how did the idea for the "International Cargobike of the Year" award come about?

JR: Actually, it was an obvious idea: From my point of view, the trend towards the increased use of Cargobikes was already apparent from 2015. In that year, we in LOGISTRA also recognized the trend topic of city logistics and created the permanent series "LOGISTRA City Check", in which we report on "best practice" examples of green city logistics. The first Cargobike applications were quickly added to this series, which grew in number over time. Early adopters included GO! Express or UPS, but also start-ups such as Messenger in Berlin, Velocarrier in Stuttgart or Velogista in Berlin, admittedly with a high degree of improvisation in the technology. The industry developed and professionalized very gradually, so that in 2019 we felt that now was the right time to offer the manufacturers and the rapidly growing cargo bike industry a stage and to spur on the competition a bit with an award.

Was there a role model?

JR: The model was clearly our "International Van of the Year" award, in which LOGISTRA is the German member platform and in which a pan-European jury has been awarding prizes for the best and most innovative van of the year since 1992. The mechanism is similar: the competition is intended to generate an impetus for innovation and, in an iterative process involving constructive criticism, an improvement to the product in exchange with the jury. Innovative solutions are to be honored. After a pandemic break in 2020, we held the CABOTY for the second time last year - and together with our jurors we had the feeling that there is now really music in it and something is happening. It is already becoming apparent at the IAA TRANSPORTATION that numerous new products have been developed this year and existing models have been further refined. The jury is very much looking forward to taking a look at the new bikes in Hanover and, above all, to riding them themselves.

How has the industry developed since then?

When I first reported on cargo bikes in logistics in 2012, for example, about UPS's pilot project with a heavy "Cargo Cruiser" that seemed sensational at the time, people were still laughing a lot about it; it was a niche topic for "eco-freaks. There was indeed a lack of steadfast technology, and the pioneers of cargo bike logistics - idealists with a vision of better and emission-free last-mile logistics, such as the founder of Messenger Berlin Achim Beier, who passed away much too early in 2019 - paid a high price for their persistence and staying power. However, even in early projects like the Bento Box micro-depot concept, these pioneers realized that the potential in the micro hub/bike combination is huge. 85 percent of the shipments in the delivery area could be transported by cargo bike instead of by combustion engine van. Incidentally, Arne Behrensen from the transport turnaround platform cargobike.jetzt, who also organizes the Radlogistik Verband Deutschland e. V. (RLVD) bicycle logistics conference, was already involved at that time. Even at this early stage, he pointed out that cargo bikes not only save emissions and money, but also time, a factor that has since become even more important in times of "immediacy" and short delivery windows. The pioneering DLR project "I replace a car" also demonstrated the great potential that cargo bikes in commercial use could have for climate protection and emissions reduction in the city. But, it lacked the scalable technology that was as robust as logisticians were used to from the car industry. The so-called "business case" was impossible or very difficult to present with technology that frequently snagged or failed.

Is it possible to do business with cargo bikes today?

JR: Definitely! After all, ten years after the pioneering work, it can be said that the industry has become more professional and, unlike in the beginning, logisticians have access to commercially oriented equipment. There is money to be made with cargo bikes. In some cases, interchangeable boxes are used, and standardization is a hotly debated topic in the industry. Motorcycle technology or, even better, special cargo bike components are emerging, as is stable frame construction. In the beginning, these were bike models from the B2C segment, where the tires, rims and frames in particular were not able to withstand the high stresses of everyday use. It's a different story whether you're just transporting a few groceries or kids, or palletized goods weighing 200 to 300 kilos.

And what role does electrification play in this?

JR: A very decisive one! Without the scaling due to the boom in pedelecs, which enabled millions of e-drives to be used and also brought numerous automotive suppliers such as Bosch, Brose, Mahle or Schaeffler, here together with Heinzmann, onto the scene. In the meantime, the first "digital" solutions are appearing on the market, in which there is no longer a chain at all, but instead the pedal impulse is transmitted to an electric motor via a generator. In general, the field is differentiated here as well: A motor for a heavy e-cargo bike naturally has to perform better than the drive for a "cab mom/dad. It is also clear that powerful lithium-ion batteries with exchange systems are essential during use.

And the other metatrend, digitalization, does that also play a role in the bike?

JR: Of course it's an important aspect. Because when logistics companies replace transporters with bikes, as is increasingly happening, the bikes must of course also be able to be integrated into telematics systems and dispatching. GPS modules are therefore quite common, and the fully networked Cargobike is not a dream of the future, but reality. This also has the important aspect of theft protection and GPS tracking in the event of theft.

What else is needed for a major breakthrough of bikes in logistics?

JR: Clearly, in addition to the technology, which has gradually reached a level that is also acceptable in terms of total cost of ownership thanks to leasing options that are now common, the prices have to come down. Compared to a van, where manufacturers have been scaling down costs for decades, e-cargobikes are still quite expensive. However, they then save massively in operation, which must not be forgotten in the calculation. In addition, they are a future-proof solution in the event of entry restrictions. In any case, it would be desirable to have a nationwide subsidy as lavish as that for e-cars or e-commercial vehicles, at least for the so-called market ramp-up, as it is gradually coming to an end for e-vehicles. There is currently quite a patchwork of regional and municipal subsidies.

And what role does infrastructure play?

JR: The interaction with the infrastructure is a very decisive factor for success: The cities have to create areas for microdeposits as transshipment and secure parking spaces, which is otherwise financially impossible for logistics companies, especially those from the start-up scene. After all, they are competing in the hotly contested inner-city real estate market. Creative solutions are needed here, such as the use of parking garages, vacant department stores or brownfield sites, and the will of the local authorities is needed. Then the road infrastructure must also take into account the "new" means of transport, which actually dates back to the 1920s: despite their daintiness, cargo bikes are too wide for the usual bike lanes compared to vans, they must be able to use the roads, which is why the standard speed limit of 30, a key element of the traffic turnaround, would also be so important. The speed limit of 25 km/h and the 250-watt limit, which is unsuitable for cargo bikes weighing up to 500 kilos, as specified for pedelecs, should also be considered. Because only in combination and in the overall system of bike, hub and infrastructure can Cargobikes make the breakthrough in city logistics - and take on the role of "gamechanger" that the pioneers of the industry have always believed them to have.