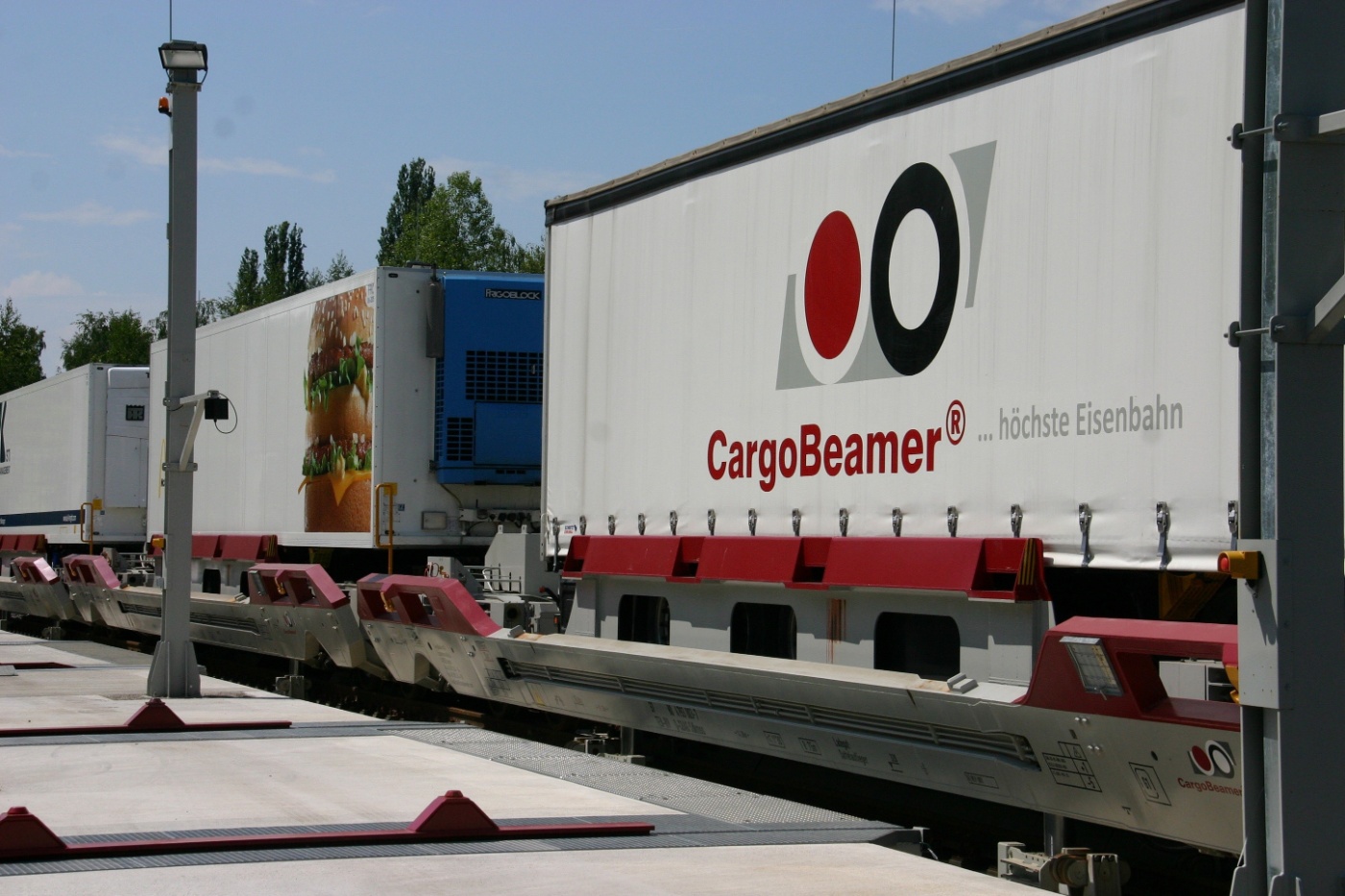 Leipzig-based intermodal operator CargoBeamer is taking off – thanks to a loan from the European Investment Bank Group (EIB) for the construction of three innovative rail freight terminals. The financing of EUR 12.6 million is equity-like – the EIB loan is secured with a profit-sharing option. The EIB loan is part of the Future Mobility Facility and is a joint initiative of the EIB and the European Commission under the debt instrument of the Connecting Europe Facility (CEF).

In Calais (France), Kaldenkirchen (Germany) and Domodossola (Italy), terminals will be built by 2022 with an innovative system for the automated transfer of trailers to and from rail wagons, enabling a modal shift to rail. In Calais CargoBeamer opened the first terminal fully equipped with CargoBeamer's proprietary technology in June 2021. In September, a partnership was was signed between the Eurotunnel operating company and CargoBeamer for the launch of a new, fully unaccompanied rail freight service across the English Channel from Perpignan / Calais to Ashford. Between the port of Duisburg in North Rhine-Westphalia and Poznań in Poland. The route is operated jointly with the duisport Group, with whom CargoBeamer has agreed a strategic partnership. Trains also run between Calais and Perpignan in France and Domodossola in Italy.

The highlight: The CargoBeamer special system can also handle non-craneable semi-trailers. Various estimates assume that between 80 and 95 percent of all semi-trailers on Germany's and Europe's roads cannot be placed on a rail wagon from above using a crane, i.e. they are not readily suitable for rail transport. This is because most transhipment terminals for combined transport (CT) only provide for loading from above, which works fine for containers. With CargoBeamer, the tractor unit and trailer drive up to the train parallel to the rail, the trailer then stands in a trough, is uncoupled and the trough is pushed into the rail wagon. This happens every minute – with full automation of the CargoBeamer terminals, up to 900 semi-trailers of all types can be automatically loaded and unloaded onto rail vehicles per day at each location.

Up to now, non-craneable semi-trailers could mainly be transported by rail in so-called accompanied CT, which takes place mainly for the crossing of the Alps. In this case, complete road trains – semi-trailers together with the tractor unit – are driven onto special flat wagons of a so-called rolling road (RoLa). The truck drivers then also travel by rail in coupled passenger wagons. However, the RoLA uses special wagons with small wheel diameters between 330 and 380 millimetres. This is extremely small, because standard container wagons have a wheel diameter of 920 millimetres. Roughly calculated the wheels of the RoMo wagons run through three times more revolutions per kilometre than normal freight wagons. This means that they wear out more quickly and the wagons have to go to the workshop more often for wheel replacement. This results in longer downtimes than with normal rail wagons, and more reserve wagons have to be kept available than in normal rail traffic. And: because of various technical limitations, the RoMo cannot take all non-craneable semi-trailer units.

This is different with CargoBeamer: "Our patented CargoBeamer wagons use standard components for the bogie and wheelsets and have four wheelsets, i.e. four axles with two wheels each. four axles with two wheels each. The wheel diameter is 922 mm without wear. Due to these features, among others, we can ensure an availability of over 97 percent. In conjunction with an operation-oriented maintenance concept, the availability of our wagons is higher, and the costs are also significantly lower than of a standard freight wagon," the company says. An additional 216 newly built wagons were added to the existing 75 by the end of 2021.

It is true that the CargoBeamer technology received EU certification back in 2013, and the connection between Kaldenkirchen and Domodossola in northern Italy has been operated daily since 2015 and is fully utilised. But the breakthrough is only possible now, because the European loan allows the purchase of additional special transport wagons. These are manufactured at CargoBeamer partner On Rail GmbH, Mettmann, together with the Transwaggon plant in Bulgaria. The traction services are purchased externally from railway companies. In principle, train booking is also possible a few hours before departure, says CargoBeamer. "With our software platform "eLogistics", customers can book slots on the trains, receive invoices and can track the train at any time via GPS. At the same time, we work with this programme in planning, scheduling and invoicing. In addition, the maintenance monitoring of the wagons is of the wagons is also managed. We have been working very successfully with the platform for several years and are convinced that our digital "eLogistics" solution is leading the industry for all the above tasks."