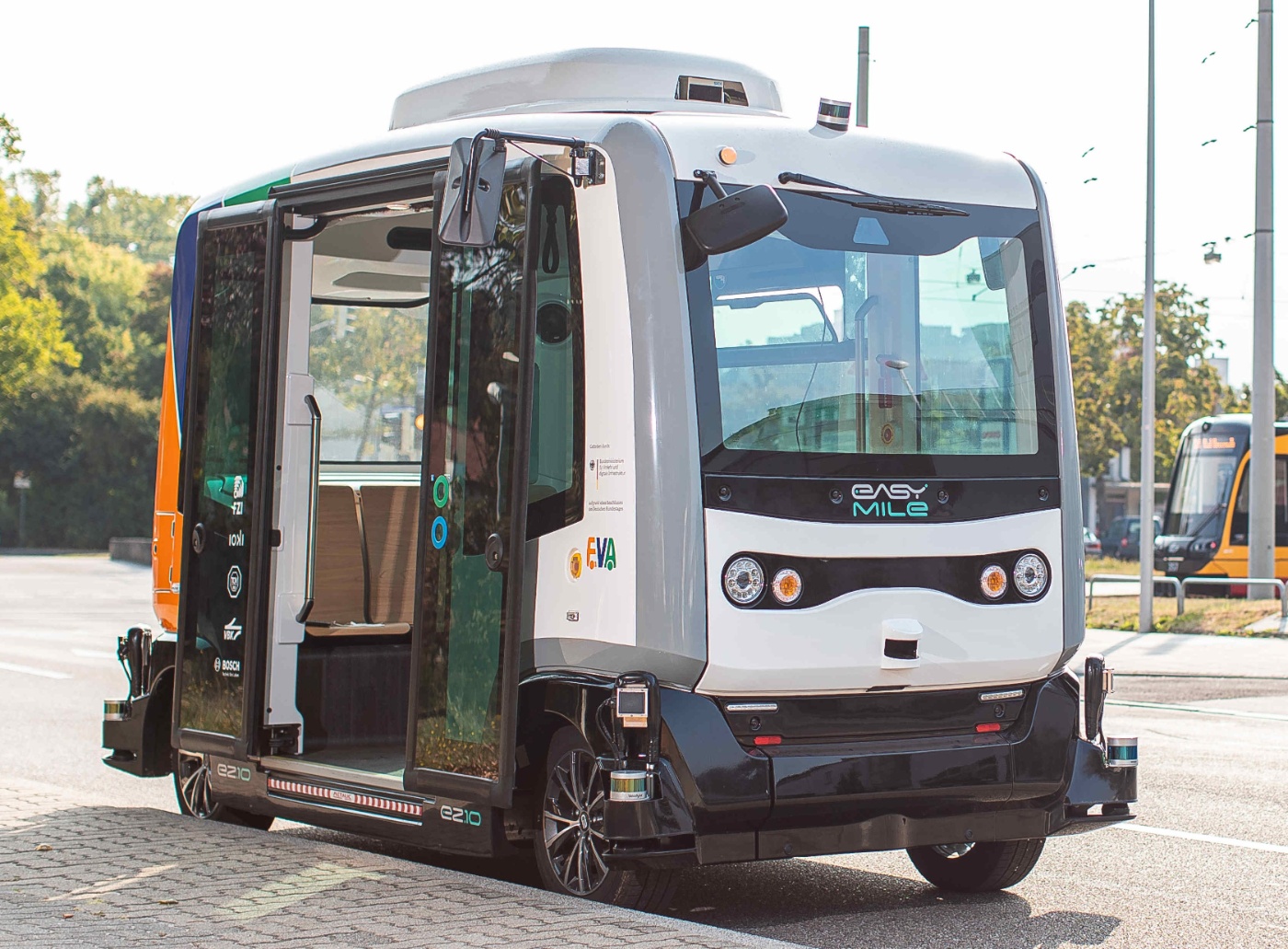 EMil, Vera, Anna and SOfia are autonomous on the road

They are called EMil, Vera, Anna, Busbee or SOfia and are on the road in public spaces on behalf of research. After testing self-driving minibuses on private property, they are being put under the real demands of public transport.

They are called EMil, Vera, Anna, Busbee or SOfia and are on the road in public spaces on behalf of research. After testing self-driving minibuses on private property, they are being put under the real demands of public transport.

The shuttles drive as feeders in hub-to-hub traffic, serve the first and last mile, in rural areas, in the city or in a neighbourhood. In real-life traffic, they provide further insights into technology and operation, passenger acceptance, ridepooling, but also economic efficiency, accessibility and the basis for transport policy decisions.

The Association of German Transport Companies (VDV) lists more than 40 autonomous shuttle bus projects in public transport on its website. For some of them, the law amending the Road Traffic Act and the Compulsory Insurance Act passed by the Bundestag and Bundesrat in May this year will provide further scope for research. The new law on autonomous driving enables driverless vehicle operation and, once ratified by the Federal President and notified by the EU Commission, it also provides legal certainty for regular operation.

EVA stands for electric, networked, automated and refers to Ella, Vera and Anna, the minibuses for the Karlsruhe district of Weiherfeld-Dammerstock. What is special about them: While the basic EasyMile vehicles operate on a virtual track, the EVA shuttles moved freely between the lanes. This was made possible by additionally equipping the vehicles with three-dimensional LiDAR laser and radar scanning from Bosch for self-localisation down to 10 cm. For environment recognition, a highly detailed map for the district was created from the project "Test Field Autonomous Driving Baden-Württemberg". Passengers could call Ella, Vera and Anna via a smartphone app from the Deutsche Bahn subsidiary ioki. This showed them a virtual stop. There was no fixed timetable.

At the end of September, the NAF-Bus project (demand-controlled autonomous driving bus) in Schleswig-Holstein came to an end after the third phase. Two autonomous shuttles of the brand EasyMile and Navya have been tested in different environments since 2018. Due to technical design problems of the prototype of the third manufacturer, Hanseatische Fahrzeug Manufaktur (HFM), the commissioning of a third shuttle was delayed. NAF bus 3 then ran between Lehe and Lunden in September. The ten partners in the research project focused on the prerequisites for autonomous, electric "public transport on demand", acceptance and user behaviour. Among other things, legal and safety aspects were investigated, energy management analyses were carried out and passenger questionnaires were evaluated.

The project "RABus" – real laboratory for automated bus operation in public transport in the city and in the countryside" in Mannheim and Friedrichshafen is about the operation and floating along of autonomous shuttles in mixed traffic. The question of economic efficiency is of great importance. In Friedrichshafen, two automated electrified buses are to be operated on fixed routes, first in the inner-city area and then also in interurban operation (40 and 60 km/h respectively) are to be integrated into the flow of traffic. In the Franklin district, formerly the largest residential area of the US Army in Mannheim, it is planned that at the end of the project in 2023, two autonomously driving e-buses will connect the neighbourhood to the tram. In Mannheim, stops are being built; in Friedrichshafen, it is being examined whether the existing stops are suitable for the automated shuttle in terms of their accessibility. The vehicles locate themselves via magnetic spots that still have to be embedded in the ground.

The name says it all: the research subject of the "Ride-4All" project in Soest is inclusion. Seven project partners are investigating the question of what hardware and software an autonomous shuttle bus needs so that everyone can use it. Since July 2021, SOfia (Soest drives inclusively & autonomously) has been commuting on the test route from the Soest bus station to the LWL vocational training centre. The EasyMile vehicle has an electronic ramp and the Acoustic Vehicle Alerting System, AVAS, which is required by law for autonomous vehicles. While driving, it scans the route over 40 m ahead and ensures that SOfia automatically slows down within a safety range of 3 m if it registers something. If something approaches the vehicle at a distance of 1.5 m, AVAS brakes completely. SOfia moves at 15 km/h in normal road traffic, partly on the state road, which was converted from a 50 to a 30 km/h zone, partly through a traffic-calmed zone. Twelve workshops with the vocational training centre will provide information about the requirements for barrier-free operation of an autonomous bus. The accompanying scientific research evaluates findings from group trips with various inclusive groups, including wheelchair users, blind people with and without assistance dogs, and people with other disabilities.

Ten project partners, five sub-projects, three routes comprise the project "Shuttle Model Region Upper Franconia" (SMO). The model region includes Kronach, Rehau and Hof. A control centre set up in Hof will monitor the shuttles in the future. If a vehicle sends out irregular signals, it is to contact the operator in the shuttle or the manufacturer. In addition, the control centre will collect and check data from live operations. Hof University of Applied Sciences will also receive information from the control centre for its research field "human-machine interaction". Further laboratory data will be provided by a demonstrator of the shuttle that has been built at the university. The control centre is also conducting research into whether self-driving shuttle traffic can be centrally monitored and how many people are required for this are required for this.